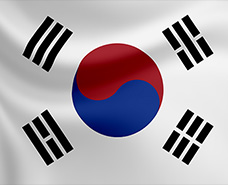 Korea is an East Asian geographic region that is divided into two separate sovereign states — North Korea and South Korea. Located on the Korean Peninsula, Korea is bordered by China to the northwest, Russia to the northeast, and is separated from Japan to the east by the Korea Strait and the East Sea, and separated from the Taiwan to the south by the East China Sea.

Korean is the official language of both North and South Korea. Modern Korean is written almost exclusively in the Hangul script, which was invented in the 15th century. While Hangul may appear logographic, it is actually a phonemic alphabet organized into syllabic blocks. Each block consists of at least two of the 24 Hangeul letters at least one each of the 14 consonants and 10 vowels.

The nature of Korea's climate is defined by its mid-latitudinal location and peninsular configuration, as well as its position as an appendage to the world's largest continent, Asia, and is influenced more by the continent than the ocean. Korea has a humid, East Asian monsoonal climate. The mean temperature during winter is generally below freezing.