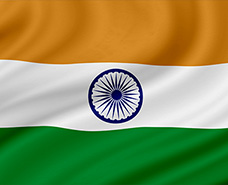 India is a country in South Asia and it’s the 7th largest country by area, the 2nd most populous country, and the most populous democracy in the world. India is surrounded by the Indian Ocean on the south, the Arabian Sea on the south-west, and the Bay of Bengal on the south-east, it shares land borders with Pakistan to the west; China, Nepal, and Bhutan to the north-east; and Burma and Bangladesh to the east. In the Indian Ocean, India is in the locality of Sri Lanka and the Maldives; in addition, India's Andaman and Nicobar Islands share a maritime border with Thailand and Indonesia.

The original Indian plate survives as peninsular India, which is the oldest and geologically most stable part of India; it extends as far north as the Satpura and Vindhya ranges in central India. The subcontinent's subsequent collision with, and subduction under, the Eurasian Plate bore aloft the planet's highest mountains, the Himalayas. Major Himalayan-origin rivers that substantially flow through India include the Ganges and the Brahmaputra, both of which drain into the Bay of Bengal.

India has 28 states, 7 union territories, and one capital. The capital of India is New Delhi.

A parliamentary republic with a multi-party system, it has six recognized national parties, including the Indian National Congress and the Bharatiya Janata Party (BJP), and more than 40 regional parties. India is a federation with a parliamentary system governed under the Constitution of India, which serves as the country's supreme legal document. India is a federation composed of 28 states and 7 union territories. All states, as well as the union territories of Pondicherry and the National Capital Territory of Delhi, have elected legislatures and governments, both patterned on the Westminster model.

People who are living India are called Indian. Also, there are other groups of people living in India such as Bengal, Tamil, Arabian, English, Persian, and so on.

India has no national language but Hindi and English are the 2 main languages to use. Hindi is the official language of the government.

4 of the world’s major religions (Hinduism, Buddhism, Jainism, and Sikhism) originated from India. Hinduism is the largest religion in India and some people are following by Islam, Christianity, Sikhism, Buddhism, and Jainism which are not following the Caste society.

India’s railroad system is well-developed. Asia’s the oldest, and the most complicated railroad systems are located in India, Pakistan, and Bangladesh and these are made while they were British territories. Water borne traffic is also able to use in the Ganges, the Indus, harbor in Calcutta. Bombay. For air traffic, Air India (AIL) for international flights, and Indian Airlines (IAL) for domestic flights are well organized.

Indian cultural history spans more than 4,500 years. During the Vedic period, the foundations of Hindu philosophy, mythology, and literature were laid, and many beliefs and practices which still exist today, such as, yoga. Much of Indian architecture, including the Taj Mahal, other works of Mughal architecture, and South Indian architecture, blends ancient local traditions with imported styles. Indian music ranges over various traditions and regional styles. Classical music encompasses two genres and their various folk offshoots: the northern Hindustani and southern Carnatic schools. Regionalized popular forms include filmy and folk music; the syncretic tradition of the bauls is a well-known form of the latter. The Indian film industry produces the world's most-watched cinema. Established regional cinematic traditions exist in the Assamese, Bengali, Hindi, Kannada, Malayalam, Marathi, Oriya, Tamil, and Telugu languages. South Indian cinema attracts more than 75% of national film revenue.