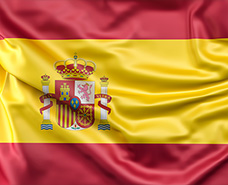 Spain is a independent state and a member of the European Union located in southwestern Europe on the Iberian Peninsula. Its mainland is bordered to the south and east by the Mediterranean Sea except for a small land boundary with the British Overseas Territory of Gibraltar; to the north by France, Andorra, and the Bay of Biscay; and to the northwest and west by the Atlantic Ocean and Portugal. Spanish territory also includes the Balearic Islands in the Mediterranean, the Canary Islands in the Atlantic Ocean off the African coast, and two independent cities in North Africa, Ceuta and Melilla, that border Morocco. Furthermore, the town of Llívia is a Spanish exclave located inside French territory. With an area of 504,030 square kilometers, it is the second largest country in Western Europe and the European Union after France, the fourth largest country in Europe after Russia, Ukraine and France. Because of its location, the territory of Spain was subject to many external influences since primeval times and through to its dawn as a country. Spain emerged as a unified country in the 15th century, following the marriage of the Catholic Monarchs and the completion of the recon quest, or Reconquista, of the Iberian Peninsula in 1492. Contrariwise, it has been an important source of influence to other regions, chiefly during the modern era, when it became a global empire that has left a legacy of over 500 million Spanish speakers today, making it the world's second most spoken first language.

Three main climatic zones can be separated; The Mediterranean climate, the semiarid climate, the oceanic climate.

Spain is a constitutional monarchy, with a hereditary monarch and a bicameral parliament, the Cortes Generales. The executive branch consists of a Council of Ministers of Spain presided over by the Prime Minister, nominated and appointed by the monarch and confirmed by the Congress of Deputies following legislative elections. By political custom established by King Juan Carlos since the ratification of the 1978 Constitution, the king's nominees have all been from parties who maintain a plurality of seats in the Congress. The legislative branch is made up of the Congress of Deputies with 350 members, elected by popular vote on block lists by proportional representation to serve four-year terms, and a Senate with 259 seats of which 208 are directly elected by popular vote and the other 51 appointed by the regional legislatures to also serve four-year terms.

Spain's industrial mixed economy is the 12th largest worldwide and the 5th largest in the European Union, as well as the Eurozone's 4th largest. The Spanish economy has been until recently regarded as one of the most dynamic within the EU, attracting significant amounts of foreign investment.

Distinct traditional regional identities within Spain include the Basques, Catalans, Galicians and Castilians, among others. There are also sizeable numbers of Asian immigrants, most of who are of Chinese, Indian, and Filipino, Middle Eastern and South Asian origins

Spanish is the official language of the entire country, and it is the right and duty of every Spaniard to know the language. Co-Official languages with Spanish are Basque, Catalan, Galician.

Culturally, Spain is a Western country. Because of the great strength of its Roman heritage in almost every aspect of Spanish life, Spain is often described as a Latin country. Nevertheless, there have been many influences on many aspects of Spanish life, from art and architecture to cuisine and music, from many countries across Europe and from around the Mediterranean, through its long history. The number of UNESCO World Heritage Sites in Spain, 40, is exceeded only by the number in Italy.

State education in Spain is free and compulsory from the age of 6 to 16. The current education system was established by an educational law of 2006, Ley Orgánica de Educación, or Fundamental Law of Education.