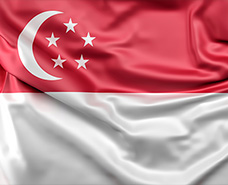 Singapore is a Southeast Asian city-state off the southern tip of the Malay Peninsula. Singapore is highly urbanized but almost half of the country is covered by greenery. More land is being created for development through land reclamation. Singapore united with other former British territories to form Malaysia in 1963 and became a fully independent state two years later after separation from Malaysia. Since then it has had a massive increase in wealth, and is one of the Four Asian Tigers. The economy depends heavily on the industry and service sectors. Singapore is a world leader in several areas: It is the world's fifth-leading financial center, the world's second-biggest casino gambling market, and the world's third-largest oil refining center. The port of Singapore is one of the five busiest ports in the world, most notable for being the busiest transshipment port in the world

Singapore has a tropical rainforest climate with no distinctive seasons, uniform temperature and pressure, high humidity, and abundant rainfall. Temperatures usually range from 23 to 32 °C (73 to 90 °F).

English is widely used in official documents and public education institutions and the official languages ​​of Singapore, and other Chinese, Malay is spoken. Tamil (Tamil) is a language mainly farmers use.

Singapore is a very diverse and young country. It has many languages, cultures and religions for a country its size. Due to the many different languages and cultures in the country, there is no single set of culturally acceptable behaviors. Dining, along with shopping, is said to be the country's national pastime. The diversity of food is touted as a reason to visit the country, and the variety of food representing different ethnicities is seen by the government as a symbol of its multiculturalism. Since the 1990s, the government has been promoting Singapore as a center for arts and culture, in particular the performing arts, and to transform the country into a cosmopolitan "gateway between the East and West". One highlight was the construction of Esplanade – Theatres on the Bay, a performing arts center opened in October 2002.

Today, Singapore has a highly developed market-based economy, based historically on extended entrepôt trade. Along with Hong Kong, South Korea and Taiwan, Singapore is one of the original Four Asian Tigers. Acute poverty is rare in Singapore; the government has rejected the idea of a generous welfare system, stating that each generation must earn and save enough for its entire life cycle. There are, however, numerous means-tested 'assistance schemes' provided by the Ministry of Community Development, Youth and Sports in Singapore for the needy, including some that pay out SGD 400 to SGD 1000 per month to each needy household, free medical care at government hospitals, money for children's school fees, rental of studio apartments for SGD 80 a month, training grants for courses, etc.