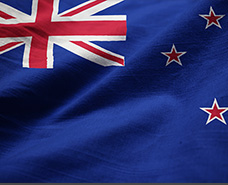 New Zealand (Aotearoa) is an island country located in the southwestern Pacific Ocean. The country geographically comprises two main landmasses ‒ that of the North and South Islands ‒ as well as numerous smaller islands. New Zealand is situated some 1,500 kilometers (900 mi) east of Australia across the Tasman Sea and roughly 1,000 kilometers (600 mi) south of the Pacific island nations of New Caledonia, Fiji, and Tonga. Because of its remoteness, it was one of the last lands to be settled by humans. Population of New Zealand is about 430 million.

New Zealand has a mild and temperate maritime climate with mean annual temperatures ranging from 10°C (50 °F) in the south to 16°C (61 °F) in the north. Historical maxima and minima are 42.4 °C (108.3 °F) in Rangiora, Canterbury and −25.6 °C (−14.08 °F) in Ranfurly, Otago. Conditions vary sharply across regions from extremely wet on the West Coast of the South Island to almost semi-arid in Central Otago and the Mackenzie Basin of inland Canterbury and subtropical in Northland. Of the seven largest cities, Christchurch is the driest, receiving on average only 640 millimeters (25 in) of rain per year and Auckland the wettest, receiving almost twice that amount. Auckland, Wellington and Christchurch all receive a yearly average in excess of 2,000 hours of sunshine. The southern and south-western parts of the South Island have a cooler and cloudier climate, with around 1,400–1,600 hours; the northern and north-eastern parts of the South Island are the sunniest areas of the country and receive approximately 2,400–2,500 hours.

New Zealand is a constitutional monarchy with a parliamentary democracy although its constitution is not codified. Queen Elizabeth II is the Queen of New Zealand and the head of state. The Queen is represented by the Governor-General, whom she appoints on the advice of the Prime Minister. The Governor-General can exercise the Crown's prerogative powers (such as reviewing cases of injustice and making appointments of Cabinet ministers, ambassadors and other key public officials) and in rare situations, the reserve powers (the power to dismiss a Prime Minister, dissolve Parliament or refuse the Royal Assent of a bill into law). The powers of the Queen and the Governor-General are limited by constitutional constraints and they cannot normally be exercised without the advice of Cabinet.

English is the predominant language in New Zealand, spoken by 98 percent of the population. Māori language has recently being declared one of New Zealand's official languages in 1987.

The British and Irish immigrants brought aspects of their own culture to New Zealand and also influenced Māori culture, particularly with the introduction of Christianity. However, Māori still regard their allegiance to tribal groups as a vital part of their identity, and Māori kinship roles resemble those of other Polynesian peoples. More recently American, Australian, Asian and other European cultures have exerted influence on New Zealand. Non-Māori Polynesian cultures are also apparent, with Pacifica, the world's largest Polynesian festival, now an annual event in Auckland. The largely rural life in early New Zealand led to the image of New Zealanders being rugged, industrious problem solvers. Modesty was expected and enforced through the "tall poppy syndrome", where high achievers received harsh criticism. At the time New Zealand was not known as an intellectual country. From the early 20th century until the late 1960s Māori culture was suppressed by the attempted assimilation of Māori into British New Zealanders. In the 1960s, as higher education became more available and cities expanded urban culture began to dominate. Even though the majority of the population now lives in cities, much of New Zealand's art, literature, film and humor have rural themes.

New Zealand is heavily dependent on international trade, particularly in agricultural products. Its principal export industries are agriculture, horticulture, fishing, forestry, dairy and mining, which make up about half of the country's exports.

Business hour is 9:30am – 4:30pm Monday through Friday. If you would like to open a bank account, please bring your passport and school ID.