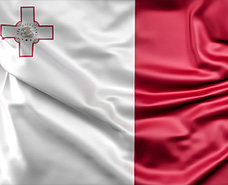 Malta is a Southern European country consisting of an archipelago situated in the center of the Mediterranean, south of Sicily, east of Tunisia and north of Libya, with Gibraltar to the west and Alexandria to the east. Malta covers just over 316 km2 (122 sq mi) in land area, making it one of the world's smallest states. It is also one of the most densely populated countries worldwide. Throughout history, Malta's location has given it great strategic importance, and a succession of powers including the Phoenicians, Greeks, Romans, Arabs, Normans, Aragonese, Habsburg Spain, Knights of St John, French and the British ruled the islands. Malta gained independence from the United Kingdom in 1964 and became a republic in 1974, whilst retaining membership in the Commonwealth of Nations. Malta was admitted to the United Nations in 1964 and to the European Union in 2004. Malta is also a party to the Schengen Agreement and in 2008 it became part of the Eurozone. Malta has a long Christian legacy and is an apostolic see. According to the Acts of the Apostles in the Bible, St. Paul was shipwrecked on "Melite", as the Greeks called the island, and ministered there. Catholicism is the official religion in Malta as declared by the Maltese constitution. Malta is internationally renowned as a tourist destination, with numerous recreational areas and historical monuments, including nine UNESCO World Heritage Sites, most prominently the Megalithic Temples which are some of the oldest free-standing structures in the world.

Malta has a Subtropical–Mediterranean climate with mild winters and warm to hot summers. Rain occurs mainly in winter, with summer being generally dry. Large fluctuations in temperature are rare. Also, Malta is one of the few places in Europe which are "green" all year round.

The Maltese language (Maltese: Malti) is the constitutional national language of Malta. Alongside the Maltese Language, English is also an official language of the country and hence the laws of the land are enacted both in Maltese and English. Maltese has a Semitic base with substantial borrowing from Sicilian, Italian, a little French, and more recently, and increasingly, English. The language includes different dialects that can vary strongly from one town to another or from one island to another.

Banks are located in most part of cities. However Malta closes most of offices in the afternoon. For example, HSBC Bank Malta opens at 8:30am-1pm, then 3pm-7pm. You may use credit card anytime or exchange money from hotel, or exchange shop in town. Please note that fees are more expensive than bank.

Since Malta is well known as a tourist attraction, there’re lots of places to eat such as TGIF, McDonald’s and Japanese, Chinese restaurants. However, there’s no Korean restaurants yet in Malta.

The culture of Malta reflects the various cultures that have come into contact with the Maltese Islands throughout the centuries, including neighboring Mediterranean cultures, and the cultures of the nations that ruled Malta for long periods of time prior to its independence in 1964.

① Dormitory Most of English schools are offering dormitories. For foods, students can cook or eat at school cafeteria. For students who study for long term, they used to move into a flat after living in a dorm. ② Host family This is an option as living with Maltese family and they are very homely. Most of host families are half boards which provide breakfast and dinner and some of them are also providing simple lunch such as a sandwich. ③ Flat Lots of students prefer this kind of residence and it’s an apartment with numbers of rooms to live with group of people. Generally, there’re available as single, double, and twin room.

Most of foreign students are spending money for transportation and food. You can save money if you can cook in the dorm or flat.