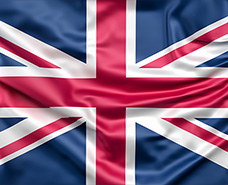 The official name of the United Kingdom (The UK, or Britain) is United Kingdom of Great Britain and Northern Ireland. The UK is an independent state located off the north-western coast of continental Europe. The country includes the island of Great Britain, the north-eastern part of the island of Ireland and many smaller islands. Apart from this land border the UK is bordered by the Atlantic Ocean, the North Sea, the English Channel and the Irish Sea.

The United Kingdom has a temperate climate, with plentiful rainfall all year round. The temperature varies with the seasons seldom dropping below −11 °C (12 °F) or rising above 35 °C (95 °F). Heavy snowfall can occur in winter and early spring on high ground, and occasionally settles to great depth away from the hills.

The United Kingdom is a unitary state ruled under a constitutional monarchy and a congressional system, with its seat of government in the capital of London. It is a country in its own right and consists of 4 countries: England, Northern, Scotland and Wales. The United Kingdom has an unmodified constitution, as do only three other countries in the world. The Constitution of the United Kingdom thus contains mostly of a collection of disparate written sources, including statutes, judge-made case law and international treaties, together with constitutional conventions. As there is no technical difference between ordinary statutes and "constitutional law" the UK Parliament can perform "constitutional reform" simply by passing Acts of Parliament and thus has the political power to change or abolish almost any written or unwritten element of the constitution. However, no Parliament can pass laws that future Parliaments cannot change. The UK has a parliamentary government based on the Westminster system that has been emulated around the world—a legacy of the British Empire.

English is the UK’s official language. There are also four Celtic languages in use in the UK: Welsh, Irish, Scottish Gaelic and Cornish. French and German are the two most commonly taught second languages in England and Scotland. In Wales, all pupils up to age 16 are either taught in Welsh or taught Welsh as a second language.

The UK has a partially regulated market economy. Based on market exchange rates the UK is today the sixth-largest economy in the world and the third-largest in Europe after Germany and France. The UK service sector makes up around 73% of GDP. London is one of the three "command centers" of the global economy (alongside New York City and Tokyo), is the world's largest financial center alongside New York, and has the largest city GDP in Europe. Edinburgh is also one of the largest financial centers in Europe. Tourism is very important to the British economy and, with over 27 million tourists arriving in 2004, the United Kingdom is ranked as the sixth major tourist destination in the world and London has the most international visitors of any city in the world.

The National Rail network of 10,072 route miles in Great Britain and 189 route miles in Northern Ireland carries over 18,000 passenger and 1,000 freight trains daily. In the year from October 2009 to September 2010 UK airports handled a total of 211.4 million passengers. In that period the three largest airports were London Heathrow Airport, Gatwick Airport and London Stansted Airport. London Heathrow Airport, located 24 kilometers west of the capital, has the most international passenger traffic of any airport in the world and is the hub for the UK flag carrier British Airways, as well as BMI and Virgin Atlantic.

Based on your satisfaction of a service, the average tip is 15% of your total bill, and usually, it’s already included on your bill for hotels.

The Standard voltage of The UK is 230-240V 50Hz. And recommend you to bring your adapter.