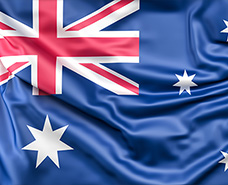 Australia (Commonwealth of Australia) is a country in the Southern Hemisphere comprising the mainland of the Australian continent as well as the island of Tasmania and numerous smaller islands in the Indian and Pacific Oceans and it’s the world's 6th largest country by total area. Neighboring countries include Indonesia, East Timor and Papua New Guinea to the north; the Solomon Islands, Vanuatu and New Caledonia to the north-east; and New Zealand to the south-east.

The first inhabitants may have been ancestors of modern Indigenous Australians. At the time of European settlement in the late 18th century, most Indigenous Australians were hunter-gatherers, with a complex oral culture and spiritual values based on reverence for the land and a belief in the Dreamtime. The Torres Strait Islanders, ethnically Melanesian, were originally horticulturalists and hunter-gatherers. Britain's Statute of Westminster 1931 formally ended most of the constitutional links between Australia and the UK. Australia adopted it in 1942, but it was backdated to 1939 to confirm the validity of legislation passed by the Australian Parliament during World War II.

The climate of Australia is significantly influenced by ocean currents, including the Indian Ocean Dipole and the El Niño-Southern Oscillation, which is correlated with periodic drought, and the seasonal tropical low pressure system that produces cyclones in northern Australia. These factors induce rainfall to vary markedly from year to year. Much of the northern part of the country has a tropical predominantly summer rainfall (monsoon) climate. The southwest corner of the country has a Mediterranean climate. Much of the southeast (including Tasmania) is temperate.

Australia is a constitutional monarchy with a federal division of powers. It uses a parliamentary system of government with Queen Elizabeth II at its apex as the Queen of Australia, a role that is distinct from her position as monarch of the other Commonwealth realms. The Queen resides in the United Kingdom, and she is represented by her viceroys in Australia (the Governor-General at the federal level and by the Governors at the state level), who by convention act on the advice of her ministers. Supreme executive authority is vested by the Constitution of Australia in the sovereign, but the power to exercise it is conferred by the Constitution specifically to the Governor-General.

Australia has a market economy with high GDP per capita and a low rate of poverty. The Australian dollar is the currency for the nation, including Christmas Island, Cocos (Keeling) Islands, and Norfolk Island, as well as the independent Pacific Island states of Kiribati, Nauru, and Tuvalu. After the 2006 merger of the Australian Stock Exchange and the Sydney Futures Exchange, the Australian Securities Exchange is now the ninth largest in the world.

Although Australia has no official language, English is so entrenched that it has become the de facto national language. Australian English is a major variety of the language with a distinctive accent and lexicon. General Australian serves as the standard dialect. Spelling is similar to that of British English with a number of exceptions. English is the only language spoken in the home for close to 79% of the population. The next most common languages spoken at home are Italian (1.6), Greek (1.3%) and Cantonese (1.2%); a considerable proportion of first- and second-generation migrants are bilingual.