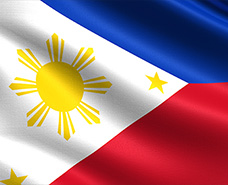 The Philippines (The Republic of the Philippines) is a sovereign country in Southeast Asia in the western Pacific Ocean. Its location on the Pacific Ring of Fire and its tropical climate make the Philippines prone to earthquakes and typhoons but have also endowed the country with natural resources and made it one of the richest areas of biodiversity in the world. An archipelago comprising 7,107 islands, the Philippines is categorized broadly into three main geographical divisions: Luzon, Visayas, and Mindanao. Its capital city is Manila. With an estimated population of about 94 million people, the Philippines is the world's 12th most populous country Multiple ethnicities and cultures are found throughout the islands. In prehistoric times, Negritos were some of the archipelago's earliest inhabitants. They were followed by successive waves of Austronesian peoples who brought with them influences from Malay, Hindu, and Islamic societies. Trade introduced Chinese cultural influences which remain to this day.

The arrival of Ferdinand Magellan in 1521 marked the beginning of an era of Spanish interest and eventual colonization. In 1543, Spanish explorer Ruy López de Villalobos named the archipelago Las Islas Filipinas in honor of Philip II of Spain. Miguel López de Legazpi arrived in the Philippines in 1565 and consolidated Spanish rule in the islands, which remained a colony of Spain for more than 300 years. The Philippines has been part of several empires: the Spanish Empire during the age of Imperialism, the United States after the Spanish-American War of 1898, and the Japanese Empire during World War II, until the official Philippine independence in 1945.

The national flag of the Philippines is a horizontal flag bicolor with equal bands of royal blue and scarlet red, and with a white equilateral triangle at the hoist; in the center of the triangle is a golden yellow sun with eight primary rays, which represent the country's first group of provinces that started the 1896 Philippine Revolution against Spain; and at each vertex of the triangle is a five-pointed golden yellow star, each of which, represent the country's 3 main islands, Luzon, Visayas and Mindanao. This flag can indicate a state of war if it is displayed with the red side on top.

Philippine cuisine has evolved over several centuries from its Malayo-Polynesian origins to become a mixed cuisine with many Hispanic, Chinese, American, and other Asian influences that have been adapted to local ingredients and the Filipino palate to create distinctively Filipino dishes. Dishes range from the very simple, like a meal of fried salted fish and rice, to the elaborate, such as the paellas and cocidos created for fiestas. Popular dishes include lechón, adobo, sinigang, kare-kare, tapa, crispy pata, pancit, lumpia, and halo-halo. Some common local ingredients used in cooking are calamondins, coconuts, saba (a kind of short wide plantain), mangoes, milkfish, and fish sauce. Filipino taste buds tend to favor robust flavors but the cuisine is not as spicy as those of its neighbors.

The Philippines has a tropical maritime climate and is usually hot and humid. There are three seasons: the hot dry season or summer from March to May, the rainy season from June to November, the cool dry season from December to February. Sitting astride the typhoon belt, most of the islands experience annual torrential rains and thunderstorms from July to October, with around nineteen typhoons entering the Philippine area of responsibility in a typical year and eight or nine making landfall.

Electricity in Philippines is 220 Volts, If you travel to Philippines with a device that does not accept 220 Volts at 60 Hertz, you will need a voltage converter. Outlets in Philippines generally accept 2 types of plug; flat blade, and two round pins. If your appliances plug has a different shape, you may need a plug adapter.

Public phones are hard to find in Philippines. If you’re in an emergency situation, please find any closest local police station. Domestic calling doesn’t have a good signal and it takes a long time to connect. If you wish to make an international call, you can use hotel telephone or Philippine Long Distance Telephone Company (PLDT). Public phone types can be different depends on the area and accepts card or coins. You could make a call via telephone operator or a direct call. If you’re making a direct call, press 00+country code+ rest of the number without 0 on the first 0 of phone number.

Tourist can be a target of many crimes. Please be careful in crowded areas from pickpocket and do not show your ID to any random people. Some people rob tourists’ money as impersonating as police officer and immigrant officer.. ① Emergency No. : 501-650 or 501-728 ② Police &Fire: 757 or 116