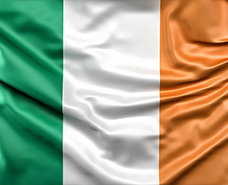 Ireland (officially Republic of Ireland) is an island to the northwest of continental Europe. Irish culture has had a significant influence on other cultures, particularly in the fields of literature and, to a lesser degree, science and education. A strong indigenous culture exists, as expressed for example through Gaelic games, Irish music and the Irish language, alongside mainstream Western culture, such as contemporary music and drama, and a culture shared in common with Great Britain, as expressed through sports such as soccer, rugby, horse racing, and golf, and the English language.

Despite the political partition, the island of Ireland continues to act as a single entity in a number of areas that transcend governmental agencies. The two jurisdictions share transport, telecommunications, energy and water systems. With a few notable exceptions, the island is the main organizational unit for major religious, cultural and sporting organizations.

The dominant influence on Ireland's climate is the Atlantic Ocean. Consequently, Ireland does not suffer from the extremes of temperature experienced by many other countries at similar latitude. Average annual temperature is about 9 °C. In the middle and east of the country temperatures tend to be somewhat more extreme than in other parts of the country.

Irish and English are two main languages in Ireland. However, Irish is now minority language.

Christianity is the largest religious group in Ireland. The numbers of people for other religions are very small since most of these group, they’re immigrants.

The zeal for children’s education in Ireland is quite high and illiteracy is low. There’s no rank of colleges in Ireland since they’re offering educations equally. The most prosperous college is Trinity College in Dublin.

Gaelic football, Irish football is the most popular sport in Ireland. Swimming, golf, aerobics, soccer, cycling, Gaelic football and billiards/snooker are the sporting activities with the highest levels of playing participation.

Ireland doesn’t require the tourist visa to EU and EEA, most of north and south American countries, Korea, Japan, and so on. Well-known spots are; Kildare and Kicklow, Cliffs of Moher, Boyne Vally, Derry, Skellig.