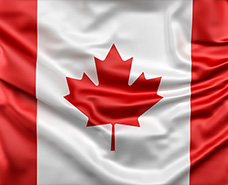 Canada is a North American country consisting of ten provinces and three territories. Located in the northern part of the continent, it extends from the Atlantic Ocean in the east to the Pacific Ocean in the west, and northward into the Arctic Ocean. Spanning over 9.9 million square kilometers, Canada is the world's second-largest country by total area, and its common border with the United States is the longest land border in the world.

The history of Canada covers the period from the arrival of Paleo-Indians thousands of years ago to the present day. Canada has been inhabited for millennia by distinctive groups of Aboriginal peoples, among who evolved trade networks, spiritual beliefs, and social hierarchies. Some of these civilizations had long faded by the time of the first European arrivals and have been discovered through archaeological investigations. Various treaties and laws have been enacted between European settlers and the Aboriginal populations. Beginning in the late 15th century, French and British expeditions explored, and later settled, along the Atlantic coast. France ceded nearly all of its colonies in North America to Britain in 1763 after the Seven Years' War. In 1867, with the union of three British North American colonies through Confederation, Canada was formed as a federal dominion of four provinces. This began an accretion of provinces and territories and a process of increasing autonomy from the British Empire, which became official with the Statute of Westminster of 1931 and completed in the Canada Act of 1982, which severed the vestiges of legal dependence on the British parliament.

Canada has a strong democratic tradition, upheld through a parliamentary system within the context of a constitutional monarchy, the monarchy of Canada being the foundation of the executive, legislative, and judicial branches. The sovereign is Queen Elizabeth II, who also serves as head of state of 15 other Commonwealth countries and each of Canada's ten provinces and resides predominantly in the United Kingdom.

Canada occupies a major northern portion of North America, sharing the land borders with the contiguous United States to the south and the US state of Alaska to the northwest. Canada stretches from the Atlantic Ocean in the east to the Pacific Ocean in the west; to the north lays the Arctic Ocean. By total area (including its waters), Canada is the second-largest country in the world, after Russia.

Average winter and summer high temperatures across Canada vary from region to region. Winters can be harsh in many parts of the country, particularly in the interior and Prairie provinces, which experience a continental climate, where daily average temperatures are near −15 °C (5 °F), but can drop below −40 °C (−40 °F) with severe wind chills. In noncoastal regions, snow can cover the ground for almost six months of the year, while in parts of the north snow can persist year-round. Coastal British Columbia has a temperate climate, with a mild and rainy winter. On the east and west coasts, average high temperatures are generally in the low 20s °C (70s °F), while between the coasts, the average summer high temperature ranges from 25 to 30 °C (77 to 86 °F), with temperatures in some interior locations occasionally exceeding 40 °C (104 °F).

Canada's aboriginal population is growing at almost twice the national rate, and 3.8% of Canada's population claimed aboriginal identity in 2006. Another 16.2% of the population belonged to a non-aboriginal visible minority. The largest visible minority groups in Canada are South Asian (4.0%), Chinese (3.9%) and Black (2.5%). Canada has one of the highest per-capita immigration rates in the world, driven by economic policy and family reunification, and is aiming for between 240,000 and 265,000 new permanent residents in 2012, the same number of immigrants as in recent years. In 2010, a record 280,636 people immigrated to Canada. New immigrants settle mostly in major urban areas like Toronto and Vancouver. Canada also accepts large numbers of refugees. The country resettles over one in 10 of the world’s refugees.

English and French are the first languages. In Quebec, French is the official language

Canadian society is often depicted as being "very progressive, diverse, and multicultural". Canada's culture draws influences from its broad range of constituent nationalities, and policies that promote multiculturalism are constitutionally protected. In Quebec, cultural identity is strong, and many French-speaking commentators speak of a culture of Quebec that is distinct from English Canadian culture. However, as a whole, Canada is in theory a cultural mosaic – a collection of several regional, aboriginal, and ethnic subcultures. Government policies such as publicly funded health care, higher taxation to distribute wealth, outlawing capital punishment, strong efforts to eliminate poverty, an emphasis on multiculturalism, stricter gun control, and legalization of same-sex marriage are social indicators of Canada's political and cultural values.